With resilience, the girls showed fantastic teamwork, great communication and amazing sportsmanship, which in turn, led the team to rapidly evolve throughout the morning.

Churchill are showing the way!

Churchill year 5 and 6 girls represented the school in the Girls' North Somerset Football Festival. This new initiative is to encourage more girls to be involved in sport; this time focusing on football.

The 8 budding footballers, some who were playing a competitive match for the first time, showed great teamwork, sportsmanship and growing skill throughout the match.

Against a very tough opponent in St George's, who boasted a wealth of footballing experience, Churchill held their own for long periods of play. Some excellent saves from Romy in goal and some meaty tackles in defence from Holly and Lola ensured that the team were going to fight for everything. Some nice passages of play and defence-splitting passes from Erin, Immy, Hattie and Kitty meant that the team were also a threat throughout. Darcey led the line superbly - ensuring their defence didn't get a moment's rest.

After St George's went ahead, Churchill capped off a fine move to draw level with a neat finish from a tight angle by Immy. Roared on by an encouraging home crowd, Churchill tried their best to get back into the game in the second half, but some top finishing by their opponents meant, despite their best efforts, the win wasn't to be this time.

The team will have the opportunity to play again in the Summer term when they will face their next opponents.

All the girls involved should be so proud of themselves and have hopefully encouraged more girls to try out new sports. 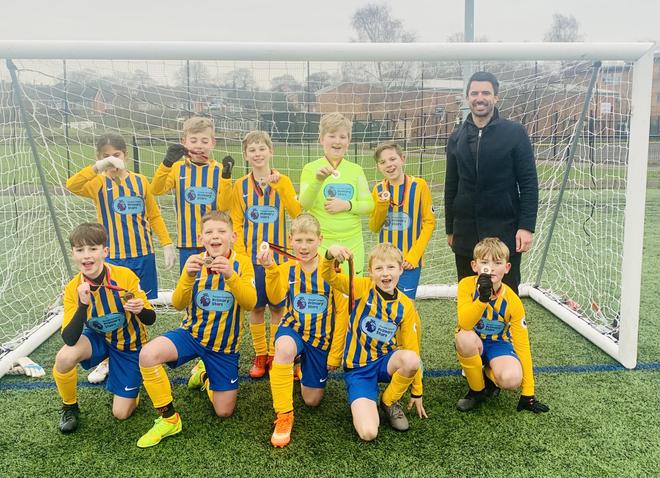 The frustration of missing out on competitive football over lockdown has well and truely diminished. Having already proved to be North Somerset's number one football team, it was time to show their talent on a larger stage. Aiming to be number one in the whole of Somerset meant that they would have to battle their way past 11 other top teams.

The squad managed to show their talent, resilience and team work to qualify from their group in second place. They showed some scintillating passages of play, which resulted in some very impressive goals. Whilst at one end the attacking threat was relentless, the defensive unit had to hold strong and put their bodies on the line. On the rare occasion that the defensive line was broken, they had their goalkeeper in fine form to bail them out.

After two wins, a draw and a last minute defeat, Churchill progressed to the knockout round and the semi final.

Knowing they would need to do it the hard way to have a route through to the final, they had to face the top of the table from Group 2. Winning every 50-50 tackle and second ball, it was quite the battle to progress; either a mistake or a moment of brilliance was going to decide this tie and it was the latter. A free kick on the left saw a thunderbolt rocket into the top right hand corner to send Churchill into delirium. The team spirit, that has proven to be one of their main strengths, saw them hold out for the win and a place in the final.

Ironically, the final would see Churchill face the only team that had beaten them in the group stage. Again, who ever scored first, you felt, would be decisive and it proved to be true. With chances at both ends, the opposition were clinical when it came to taking theirs.

After initial feelings of disappointment, the team reflected on what was an unbelievable achievement as they picked up their runners-up medals and a place in Churchill's footballing history after being crowned the second best team in Somerset.

The squad, every boy and girl, made the school proud. The team spirit, talent, dedication, behaviour and sportsmanship on display showed Churchill to be the very best that they can be.

Sport in our school

SPORTS DAY! This week brings to a close our hard work and effort put in to challenging ourselves to be the best that we can. I am so proud of everyone who has submitted their scores and to those who kept up that community spirt! Thank you #TEAMCHURCHILL.
Check our school website for My Personal best scores over the past couple of weeks.
Click this link to see the final video from WESPORT!

How to Stay Active whilst you’re are home We're all now spending more time at home and that means many of us are thinking about how we can get, or stay, active. Official advice is to follow the guidance on social distancing and avoid non-essential travel - including working from home if you can - which means our routines are changing. But staying active is more important than ever right now, and even if you’re mostly in your house at the moment, there are plenty of ways you can still do so.

Here are a few ideas to keep you busy and moving at home!

PE Home Learning Video 10: Rubik's Cube/Colour Matching 🔵🟢🔴 Focus: Coordination & Thinking Skills How: Move the coloured cups so there is 3 of each colour in...

Unfortunately not the ones with chocolate chips.

Some cookies are necessary in order to make this website function correctly. These are set by default and whilst you can block or delete them by changing your browser settings, some functionality such as being able to log in to the website will not work if you do this. The necessary cookies set on this website are as follows:

Cookies that are not necessary to make the website work, but which enable additional functionality, can also be set. By default these cookies are disabled, but you can choose to enable them below: